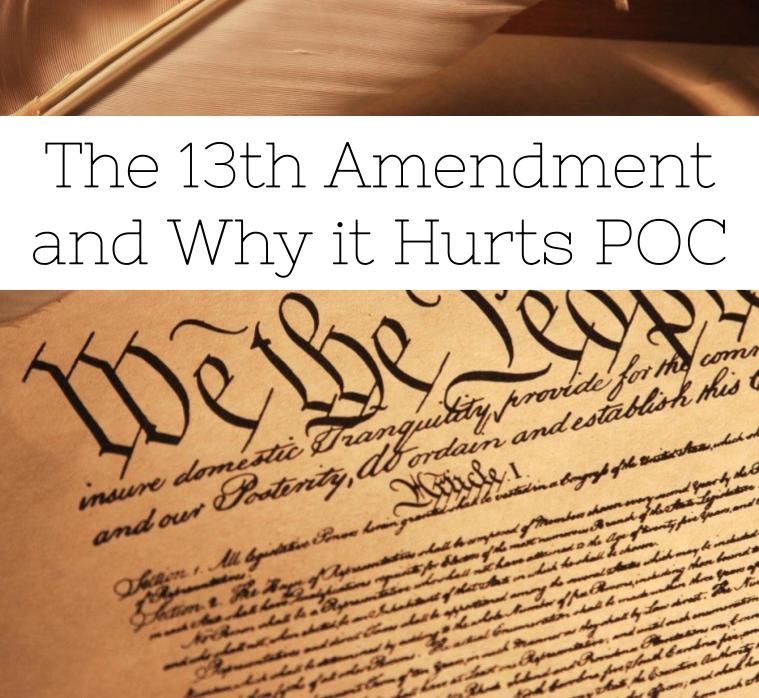 The 13th Amendment and Why it Hurts POC

Before we get started, let’s play a quick game. When I give you a word, I want you to think about the first thoughts that come to your head: dogs, pizza, slavery. You may be wondering, why am I talking about slavery? We’re in the 21st century, and slavery in the US doesn’t exist anymore. Well think again. Just recently last year, according to CNN, sixteen state constitutions still allow slavery as punishment for crime (Almasy 2018). I have to say that the act of slavery as a form of punishment definitely borders a violation of the 8th Amendment. As stated in the US Constitution, “Excessive bail shall not be required, nor excessive fines imposed, nor cruel and unusual punishments inflicted,” (U.S. Constitution. Amendment. VIII). And I’m not sure about you all, but I think the treatment of another human being as property, restricting them of their rights and freedom could definitely constitute as a form of cruel or unusual punishment. While slavery may have been abolished in the United States back in 1865 with the 13th Amendment, it wasn’t completely eliminated. The 13th Amendment actually allows slavery as long as it serves as punishment if the party is duly convicted (U.S. Constitution. Amendment XIII). And while it may seem this is fair punishment to criminals, this specifically targets prisoners of color several times more than a non person of color, and that in itself is a problem.

Let’s first start with a brief history lesson and the traumatic experiences many slaves had to go through before slavery was abolished. National Geographic claims slavery was first introduced to America back in the 1500s when Spanish and Portuguese settlers took slaves from Africa and transported them to the Americas (National Geographic Education Staff 2018). A few years later, the Triangle Trade was established with Great Britain as the leader. The conditions of the voyage were horrible. Because ships were often too small to fit the amount of slaves they wanted, slaves would be tightly packed and forced to live in their own filth for weeks– if not months– on end. According to BBC News, about 2 million slaves died before even entering the Americas due to smallpox, scurvy, and measles. And that was just the boat ride over. Once slaves entered the Americas, the circumstances only worsened: Slaves forced to work on plantations up to 15 hours per day, families torn apart, women sexually abused and raped, and children born to enslaved mothers also became slaves for life. Not only that, if slaves ever “acted out” or tried to run away, they were brutally beaten and sometimes even murdered. Do you want to know what the worst part is? This was all legal at the time being. Slave owners received no repercussions at all because slaves were seen as less than; they were seen as property, easily replaceable property.

But going back to today, even if slavery is only used as a form of punishment, we are subjecting others to the kind of treatment and abuse that many Africans and African Americans once faced. Let’s discuss why allowing slavery to still exist could be problematic if you can’t already imagine. Scholars, activists, and even prisoners have linked the legal act of slavery to the rise in prison systems that are five times more likely to incarcerate black people than the rate of white people and profit from their unpaid or underpaid work as reported by History (Little 2018).

Michelle Alexander, legal scholar, writes “The criminal justice system was strategically employed to force African Americans back into a system of extreme repression and control, a tactic that would continue to prove successful for generations to come.” So in an attempt to repair the damage caused by slavery, the 13th Amendment didn’t do very much to benefit the lives of African Americans if the prison system is still subjecting prisoners to what is known as modern day slavery. States such as North Carolina, Nevada, Tennessee, among more still allow slavery as a form of punishment in their state constitutions (Norwood 2018).

At the end of the day, slavery is and always will be slavery no matter what kind of spin you put on it. And allowing our states to treat humans, especially people of color, prisoners or not, as slaves is something that needs to be abolished now in order to live up to our rights of life, liberty, and property.

Little, B. (October 2018). Does an Exception Clause in the 13th Amendment Still Permit Slavery?. History. Retrieved from https://www.history.com/news/13th-amendment-slavery-loophole-jim-crow-prisons

Norwood, C. (November 2018). Slavery Is Still a Legal Punishment in the U.S. But Not in This State Anymore. Governing. Retrieved from https://www.governing.com/topics/politics/gov-colorado-ballot-slavery-amendment.html

The Constitution of the United States. Retrieved from https://constitutionus.com/#a4s2c3