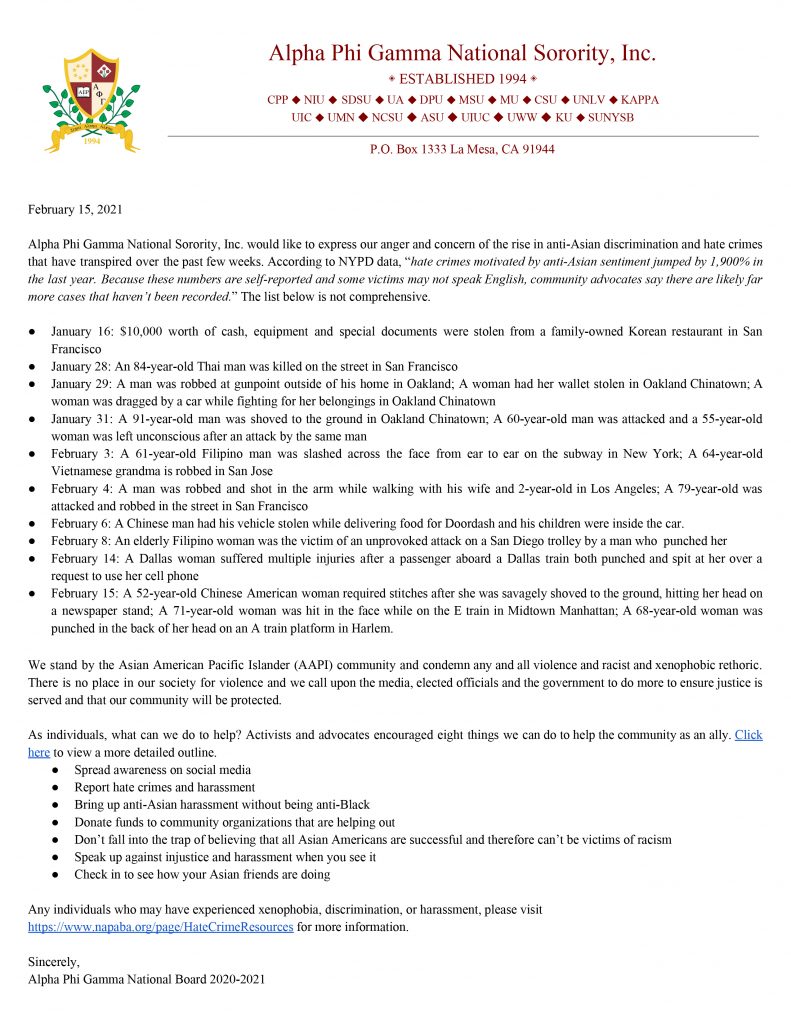 Alpha Phi Gamma National Sorority, Inc. would like to express our anger and concern of the rise in anti-Asian discrimination and hate crimes that have transpired over the past few weeks. According to NYPD data, “hate crimes motivated by anti-Asian sentiment jumped by 1,900% in the last year. Because these numbers are self-reported and some victims may not speak English, community advocates say there are likely far more cases that haven’t been recorded.” The list below is not comprehensive.

● January 16: $10,000 worth of cash, equipment and special documents were stolen from a family-owned Korean restaurant in San Francisco.
● January 28: An 84-year-old Thai man was killed on the street in San Francisco.
● January 29: A man was robbed at gunpoint outside of his home in Oakland; A woman had her wallet stolen in Oakland Chinatown; A woman was dragged by a car while fighting for her belongings in Oakland Chinatown.
● January 31: A 91-year-old man was shoved to the ground in Oakland Chinatown; A 60-year-old man was attacked and a 55-year-old woman was left unconscious after an attack by the same man.
● February 3: A 61-year-old Filipino man was slashed across the face from ear to ear on the subway in New York; A 64-year-old Vietnamese grandma is robbed in San Jose.
● February 4: A man was robbed and shot in the arm while walking with his wife and 2-year-old in Los Angeles; A 79-year-old was attacked and robbed in the street in San Francisco.
● February 6: A Chinese man had his vehicle stolen while delivering food for Doordash and his children were inside the car.
● February 8: An elderly Filipino woman was the victim of an unprovoked attack on a San Diego trolley by a man who punched her.
● February 14: A Dallas woman suffered multiple injuries after a passenger aboard a Dallas train both punched and spit at her over a request to use her cell phone.
● February 15: A 52-year-old Chinese American woman required stitches after she was savagely shoved to the ground, hitting her head on a newspaper stand; A 71-year-old woman was hit in the face while on the E train in Midtown Manhattan; A 68-year-old woman was punched in the back of her head on an A train platform in Harlem.

We stand by the Asian American Pacific Islander (AAPI) community and condemn any and all violence and racist and xenophobic rhetoric. There is no place in our society for violence and we call upon the media, elected officials and the government to do more to ensure justice is served and that our community will be protected.

As individuals, what can we do to help? Activists and advocates encouraged eight things we can do to help the community as an ally. Click here to view a more detailed outline.

Any individuals who may have experienced xenophobia, discrimination, or harassment, please visit
https://www.napaba.org/page/HateCrimeResources for more information.